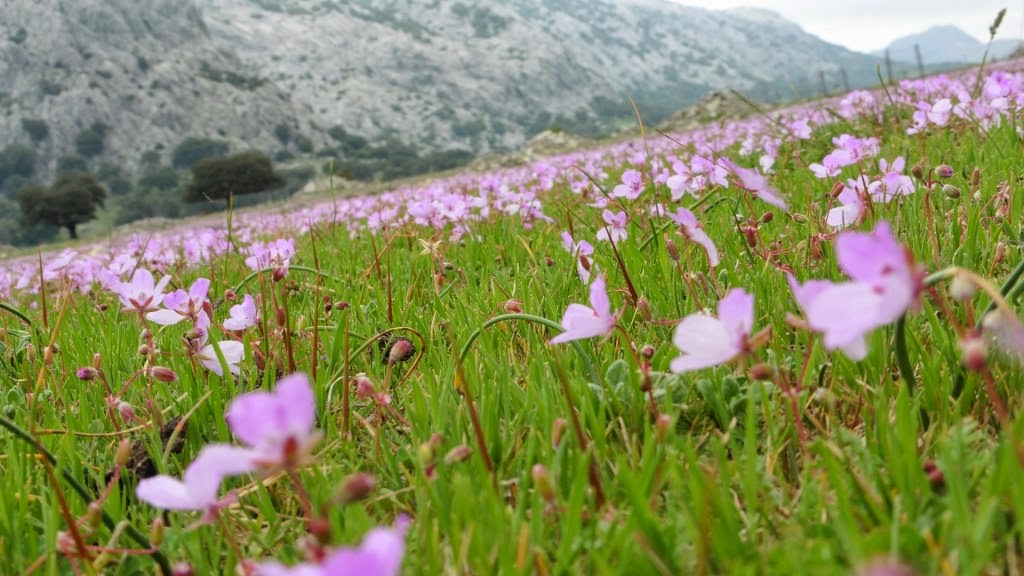 A hiking week on the footsteps of the Andalusian Bandoleros in 5 stages, from village to village - discover the most hidden Hinterland 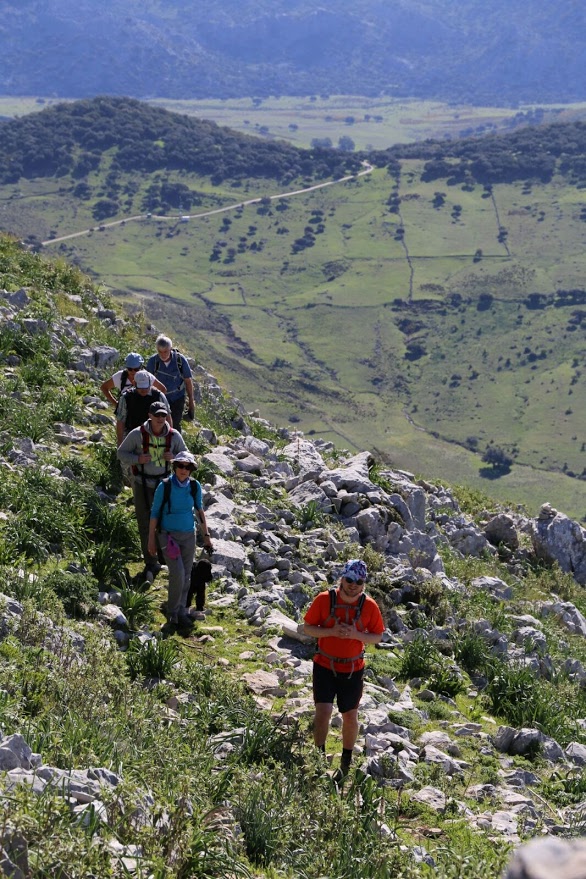 We will be walking through the valley of the Río Guadiaro, on the mountain range of Grazalema and the "Serranía de Ronda".

Through white villages, cork forests, deep gorges, over steep mountain ranges with bizarre rock formations, plateaus with cows and sheep, who remember the alpine meadows in spring and back down into the valley of the Guadiaro river, following the railway line that connects Ronda with the seaport of Algeciras.

The ultimate goal of the walk is the emblematic city of Ronda, with the impressive Tajo Gorge.

The area around the Rio Guadiaro and Genal Valley has an amazing botanical richness, from cork oak, chestnut, mountain oaks, native bush palms, the unique pinsapos trees (Spanish fir), to more than 30 species of orchids.

The scenic beauty and diversity of the regions along the two rivers is dominated by the karstischem rocks of the Grazalema mountains, the Serrania de Ronda, the fertile valley along the rivers, the climate, that has a very high annual rainfall, despite the extreme heat in summer and even higher up yet, the lush green meadows, which become glowing golden carpets in the Autunm and last but not least, the impressive views of the Andalusian coast, from the Mediterranean to the Atlantic Ocean, the Strait of Gibraltar and the coast of Africa. 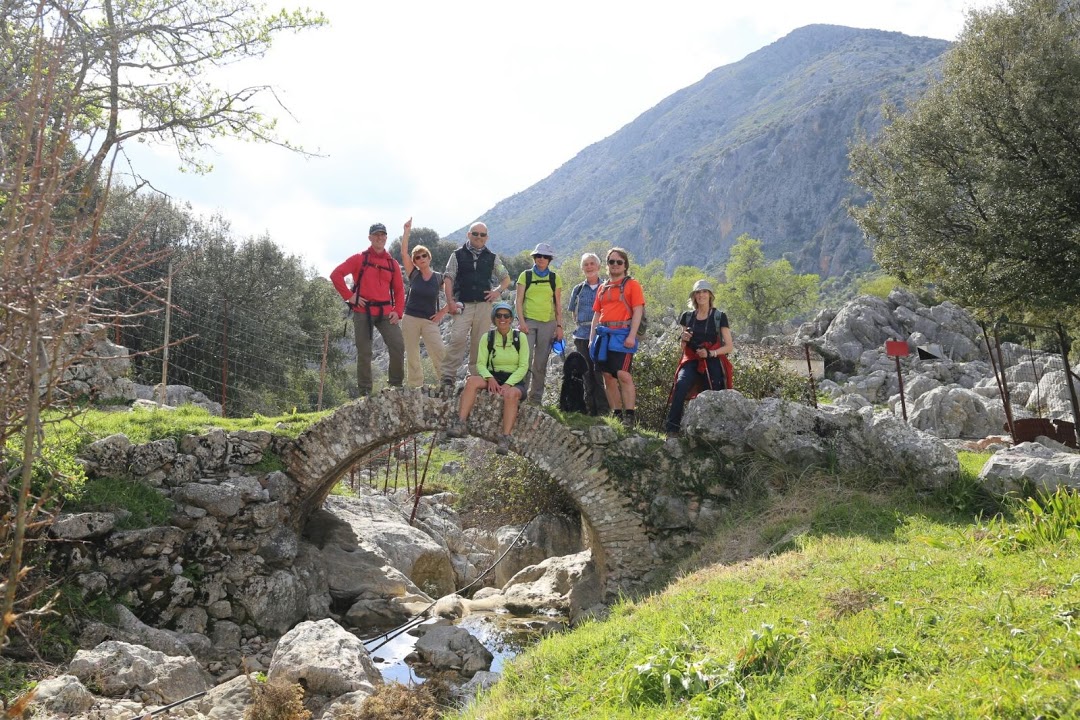 Time seems to stand still in the typical white villages along the route. Each village tells a piece of the history of Andalusia and the names of villages, the majority from the Arab, tell part of the story. Many of them have the suffix "de la Frontera" - meaning 'of the border', because here the border ran between the Christian and Moorish kingdoms. But early Christian temples, Roman roads and bridges, are also to be seen.

In typical village bars, with tapas and a glass of Malaga wine, the locals like to tell the romantic tales of the Bandoleros, who were hiding in the rugged mountain ranges of the area. Though they never agree whether they were bandits or freedom fighters, in any case, they have become legends.

The unknown hinterland of western Andalusia is somewhere for individualists, for those who want to know Andalusia from a different side, its mountains and valleys, its people in the sleepy villages, their crafts, Their tradition, and especially the peace and the feeling of being far away from everything, like being in another world. 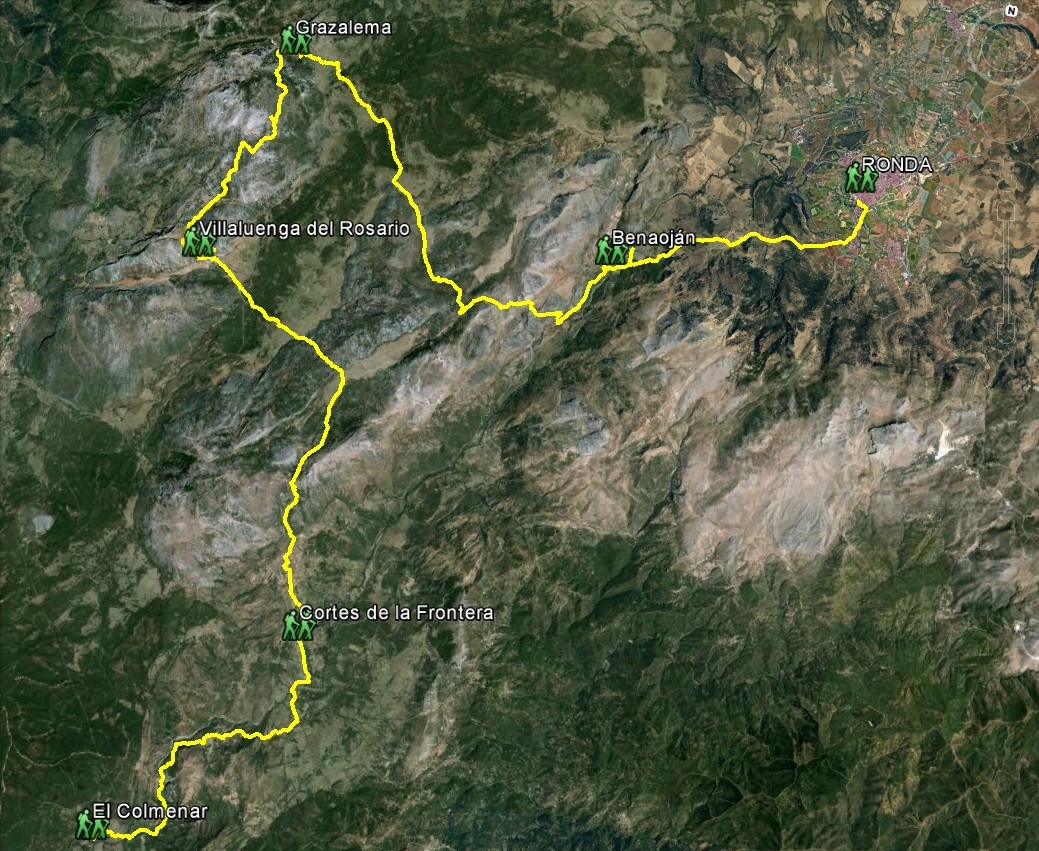 Detailed description of the route

We will be walking through the valley of the Río Guadiaro, on the mountain range of Grazalema and the "Serranía de Ronda". Through white villages, cork forests, deep gorges, over steep mountain ranges with bizarre rock formations, plateaus with cows and sheep, who remember the alpine meadows in spring and back down into the valley of the Guadiaro river, following the railway line that connects Ronda with the seaport of Algeciras.

The ultimate goal of the walk is the emblematic city of Ronda, with the impressive Tajo Gorge 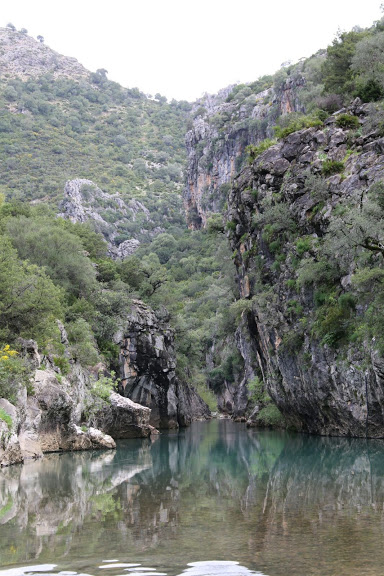 Pick-up from Marbella and transport to starting point (about 1:30) We beginn our hiking tour after a coffee in the village.

The route starts gently along the river and leads along an impressive gorge, where we may see the first examples of the huge vultures that the canyon is named after, and cross the gorge over an old stone bridge. At the end of the route, we reach a little village, at the train station of Cortes de la Frontera, called Cañada del Real Tesoro, nestled between the Grazalema Natural Park and the Cork-forest. Dinner and accomodation at a Casa Rural (rural hotel) Dinner at the hotel. 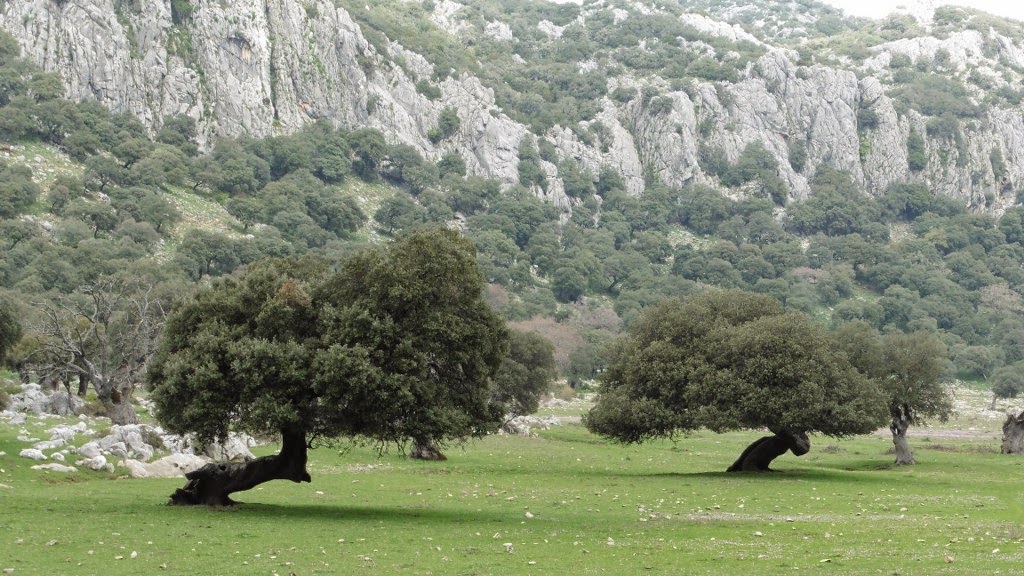 The steep climb this day tour starts with, will be rewarded by spectacular views. You look down over the coast to the Rock of Gibraltar and across to Africa. From here you can also use the peaks of the Sierra Bermeja (Arabic for red mountain) to view the villages of Cortes de la Frontera, Gaucin and Jimena de la Frontera. The two plateaus which you cross, surrounded by mountains, are reminiscent of meadows in the Alps. Just before you reach the pretty little village of Villaluenga, you can see the remains of an ancient Roman bridge. Accommodation and dinner in a nice 2-star hotel in the village.

Day 3 - from Villaluenga to Grazalema 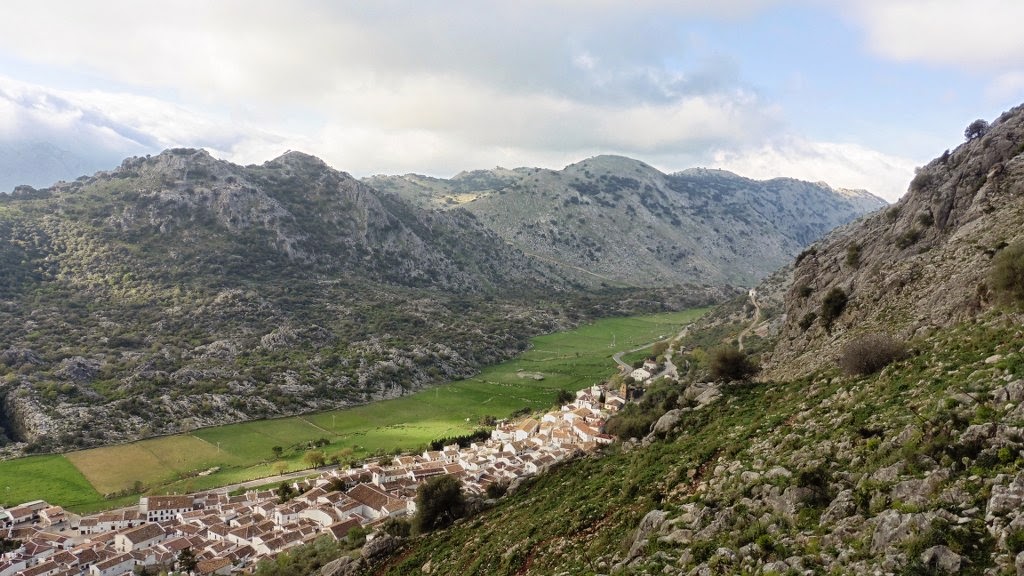 Another spectacular hike that takes you across the rugged cliffs of the Grazalema mountains, with their bizarre rock formations that are an ideal retreat for mountain goats and other animals. The route takes you very close to the top of the mountain Reloj (clock), over and back down to Grazalema. Here you will meet more hikers, as there are many hiking routes starting from Grazalema.

Accommodation and dinner in hotel in the village.

Day 4 - from Grazalema to Montejaque 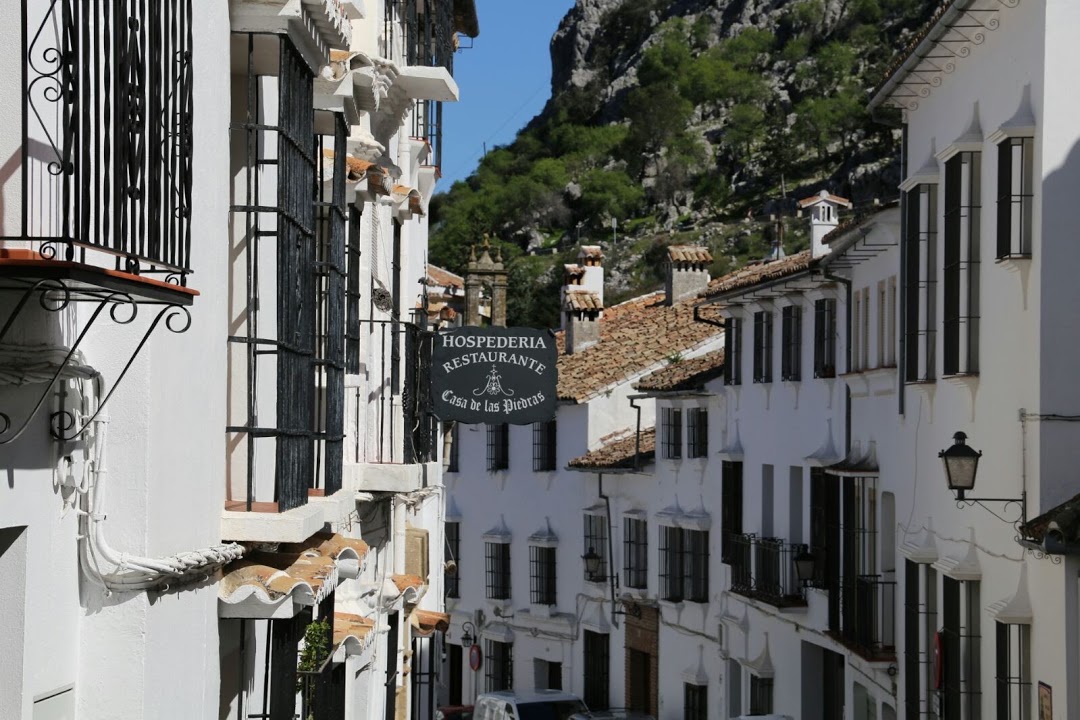 You leave from Grazalema on an old Roman road. A long, but varied and equally attractive route awaits you. Over several ridges and valleys you walk again to a hight of over 1000 metres and from there you can catch the first glimpse of the city of Ronda. The path leads down to the railway

station of Benaoján.
We finish the route of the day near the Pileta Cave (Pick up), and will start from there tomorrow morning.
Accommodation and dinner in a nice little hotel at the charming mountain village Montejaque

On the morning of our last hiking day, we take the time before hiking to Ronda, to visit the cave "Pileta", with paleolithic cave paintings (tranfer to Cave included).
This last hike of your week takes you through meadows and forests to Ronda, and the Tajo gorge. Drive back to Marbella

THIS TOUR IS ALSO AVAILABLE AS A SELF GUIDED TOUR

You will be welcomed by a tour assistant on the day of your arrival at the hotel (pick-up from Marbella is also possible) you receive detailed hiking directions and a GPS (200 € deposit). Our tour assistant is always available for you. So you can easily and comfortably hike on your own, at your own speed and in private.